Established in December of 2012, HHFI started out its life with a simple introductory line of one-piece non-tunable pennywhistles in the key of D made from domestic hardwoods. In time this grew to include new materials such as exotic hardwoods and Delrin, two-piece tunable versions of the original whistles, completely new metal and hybrid model whistles, and of course additional keys. I also began offering Celtic knot engravings and a custom line of hardwood presentation cases. A great deal of time, effort, and capital have been invested in my endeavours to offer premium quality instruments at a reasonable price.

Who's that mysterious man? 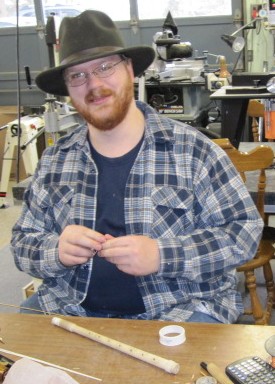 HHFI is owned and operated solely by myself, Alex DeWilde. I first began making pennywhistles in 2010 to make my father something special for Christmas that wouldn't be so much of a strain on his fingers compared to his alto recorder. I had scoured the internet and came across numerous guides for making penny whistles from copper and pvc plumbing pipes and fittings, but I really wanted something a little fancier so I set out to make a whistle from wood. This began the long, and at times grueling, process of teaching myself wood turning and machining to make the instrument and the even longer road towards being able to actually play it.

While my family has a fairly extensive musical background I was somewhat of a late bloomer coming into music. My father played a number of instruments since his school days ranging from the flute , clarinet, saxophone, bassoon, recorder, and most recently the Scottish Bagpipes. My great grandmother on my father's side had been a very accomplished pianist that played for the silent movie theaters while my great grandfather on my mother's side played in a band that garnered a command performance by the King of England prior to World War II. While I'm a far cry from that level of playing I can safely say that I'm quite thoroughly "paper trained," as my friends have jokingly described being able to read and play from sheet music, and while no virtuoso by any means I have continued to advance my playing and musical repertoire over the years.

To Infinity, and beyond!

In time I hope to continue expanding the business into other instrument lines as well, the most likely routes being further additions of the woodwind family. The flute and fife are both in my planned venu as they build off my current experience, but as with the penny whistle it will also be a journey to not only build them but learning to play them equally as well.

Check out the navigation menu to find out more about HHFI and what I have to offer.